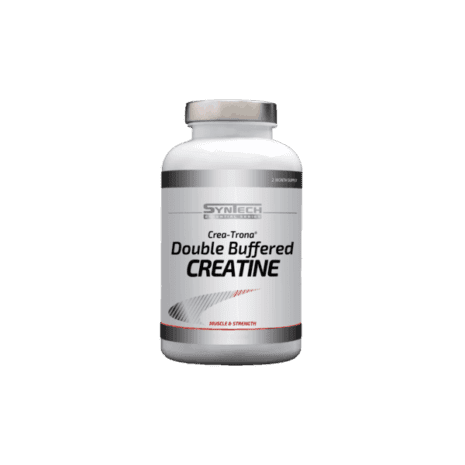 Recommended use:
1 serving = 2 capsules. Take 2 servings per day, every day of the week.
On Training Days: take 1 serving 20 minutes before training and 1 serving immediately after training.
On Rest Days: take 1 serving in the morning on an empty stomach and 1 serving between meals in the afternoon.
Crea-Trona® is double buffered Creapure® creatine. It is produced at the leading German company AlzChem, which also produces the famous Creapure® creatine.
Crea-Trona® is obtained by adding a double buffer to Creapure®, which consists of sodium carbonate and sodium bicarbonate, two natural minerals. This creates an alkaline pH value (acidity) between 8 and 12.
Crea-Trona® is much more efficient than other creatines, also more efficient than those with an alkaline pH buffer (namely the kre-alkalynes), because that double buffer prevents the pH level in the muscles from dropping rapidly during training. This leads to a greater training capacity. This also ensures a faster recovery of the original pH value after training.
See in this regard the relevant comparison between Crea-Trona® and kre-alkalynes:

This graph shows that the favorable pH value not only lasts longer, but is also more stable and therefore has a better absorption. This more stable pH-neutral environment not only ensures better absorption (i.e. less conversion to creatinine), but also acts as an efficient lactic acid buffer, which leads to better sporting performance.
Since the absorption by the muscles is maximum with a minimum conversion to creatinine, only 3 g Crea-Trona®should be taken per day for optimal effect.
In summary, what are the advantages of Crea-Trona® for athletes?